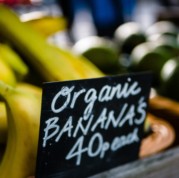 71.5 million hectares of organic production around the world

Australia, Argentina and China have the largest number of hectares used for organic crops

Organic production around the world is experiencing sustained growth, especially in the second decade of the 21st century.

The latest data, published in February 2020 by the Research Institute of Organic Agriculture (FiBL), confirm that there are now more than 70 million hectares of organic farmland worldwide. This represents a growth rate of 546% over the last 21 years.

Between 2008 and 2018, the number of hectares used for organic farming worldwide increased from more than 34.5 million to 71.5 million hectares. Farmers who have switched to organic farming have doubled over the same period of time from around 1.4 million to approximately 2.8 million. 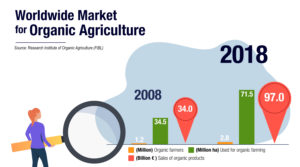 The countries with the most organic agricultural farmland are Australia with 35.6 million hectares followed, albeit by a long way, by Argentina (3.6 million) and China with 3.1 million hectares.

However, these figures do not correspond to the number of producers, with the largest numbers being located in India, with more than one million people involved in organic production on this subcontinent. The second country in the ranking is Uganda with about 210,000 producers, followed by Ethiopia with just over 200,000 growers. 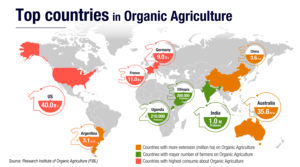 Sales of organic produce on the rise

The market for organic products is also growing at a healthy rate in terms of sales, though it is worth mentioning that this increase is not taking place in the countries with the highest production, but in the northern hemisphere, in countries which are willing to pay a premium for these products.

According to the FIBL, in 2018, the market for organic produce in the United States (the last year for which we have available data) was worth more than €40 billion. The US giant was followed by two European countries, Germany and France, with nearly €11 billion and just over €9 billion, respectively.

In terms of per capita consumption, the European countries with the highest incomes are in the lead. Switzerland and Denmark spend €312 per capita on organic food, followed by Sweden with an average annual consumption of €231 per capita.

But, what is the reason for this growth?

Climate change, overexploitation of land, the consequences of greenhouse gases, etc. have underlined the importance of protecting the environment for both farmers and consumers. This is fostering the development of new technologies and more environmentally friendly techniques, as well as driving trends such as carbon footprint reduction, consumption of zero-mile produce, and the production and consumption of organic products.

In addition to all of these factors, we can add the commitment of governments, which associate the concept of organic, sustainable farming with protecting the environment and combating climate change.

Boost from the authorities

One of the biggest boosts to the industry is the one being advocated by the European Union, as reported by IFOAM Organics Europe, which represents more than 200 producer organisations from 34 European countries. In its 2019 report, it recognises the steps being taken by the Commission. This body is part of IFOAM International which, in 2018, had 779 members in 110 countries. The largest number of members is located in Germany (79), followed by India (55), the United States (48) and China (45).

In the case of Europe, the European Union’s Agricultural Outlook Conference in December 2019 was the scenario for the Commissioner for Agriculture and Rural Development, Janusz Wojciechowski, and the Commissioner for Health and Food Safety, Stella Kyriakides, to establish an action plan for organic farming in 2020.

The EU has also established a strategy within the Common Agricultural Policy (CAP) which states that “the market for organic food will continue to grow and organic farming must be further promoted“. The European Commission wants to “achieve the objective of at least 25% of the European Union’s agricultural land under organic farming by 2030 and a significant increase in organic aquaculture”.

These objectives are part of the global ‘Farm to Fork’ strategy to reduce CO2 emissions and greenhouse gases.

In this regard, the recent negotiations held in October 2020 on the Common Agricultural Policy (CAP) have established the concept of “eco-schemes”, a new stream of funding that will reward agricultural and livestock practices that are beneficial to the climate and the environment. Twenty percent of direct payments will be allocated to these “eco-schemes”, and EU member states will be given flexibility to implement the measure.

The explosion of Asia

The area under organic farming in Asia is around 6.5 million hectares which, on such a large continent, accounts for only 0.4% of the total agriculture in the region. This figure represents 9% of the world’s organic crops. Asian farmers are taking an interest in organic farming and are looking to offer products that are increasingly in demand.

Within Asia, China has seen an increase in production thanks to product certification. China has 3.1 million hectares of organic farmland, while the country with the largest number of producers is India, with 1,149,371 organic growers.

In the case of China, local supermarkets are increasingly willing to stock these products, although some problems have been detected with the online sale of products labelled as “organic” in order to take advantage of the premium prices that this certified produce commands. Additionally, from a political point of view, the Chinese state is focusing on promoting organic produce among smaller growers and an increasing number of local government agencies have been visiting IFOAM’s headquarters in Bonn to learn about future opportunities for organic farming.

In the case of India, which is practically a subcontinent in itself, the effects of climate change have had a considerable impact on agriculture, which has proved to be a wake-up call for the country to react and change. Crops, including organic crops, have been devastated by excessive rainfall. However, organic farms with fertile soils and rich biodiversity have withstood the test of climate impact. The Indian authorities have learnt their lesson about the effects of climate change and the excessive use of chemicals and are now promoting organic farming.

The growing interest of the countries that make up the Asian continent has also been reflected in the opening of IFOAM country offices in different states.

Australia and large areas of farmland

If there is one region of the world where organic farming is firmly established in terms of production and consumption, it is Oceania and more specifically, Australia. In 2019, the country’s organic industry had a turnover of 2.6 billion Australian dollars and the market continues to thrive, driven by exports of its products. In this regard, in 2018 more than 30,000 tonnes of Australian organic products were exported to 61 countries.

Australia has a total of 35.7 million hectares of certified organic farmland and it is a country in which consumers value the importance of product certification to such an extent that 55% of organic buyers look for certification marks and the relevant logos on the products they purchase.

Growth in this country is evident in all indicators and the number of companies involved in the organic industry (processors, handlers, importers and exporters) rose from 4,028 in 2017 to 4,802 in 2018. However, there is one exceptional circumstance in Australia and that is the decline in the number of organic producers, with small farms disappearing and larger farms strengthening their position.

Check out the full report via the following link: