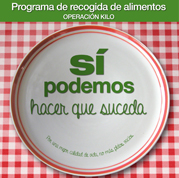 970 Kg of donated food to Caritas in Spain

In November 2013, Tradecorp launches Operation Kilo, in order to gather food in the offices of Madrid, factories and laboratories, to be donated to Caritas, official confederation of entities of charitable and social action of the Catholic Church in Spain.

With the claim, “You help, Tradecorp helps” the company seeks to involve the team in the Corporate Social Responsibility actions and they are invited to donate non-perishable foods that are distributed among families with few resources. To maximize the donation per donated kg by the team, Tradecorp is committed to donate another kg.

The action concludes with the donation of 970 kg distributed as follows: