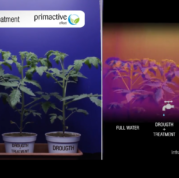 Drought stress affects plants earlier than you think. Watch it on this new infrared timelapse video !

It is a common misconception that the most common effect of drought on plants is wilting…but in reality, this is not the case. Wilted plants are in fact close to death and visible wilting is one of the final signs for drought stress before plant death!!

How do plants react to drought stress?

Plants and humans have very similar reactions to dehydration. They alter their metabolism to conserve moisture. In plants, the stomata are closed tightly to prevent water loss during transpiration and in humans the excretion of water is reduced.

As water begins to become scarce, the plant, or body, begins to implement further emergency procedures to conserve fluids. The cells are now suffering from internal stresses that are referred to as abiotic stresses.

Due to the heat generated by the cell’s own metabolism and the lack of transpiration, temperatures in the cells begin to rise, as can be seen in the time lapse video. At this stage of drought, the plant is not visibly wilting but is already suffering large internal metabolic stresses that, for example, reduce growth rate.

What are the effects of drought stress on plants?

As drought continues, the cells lose water because:

Even if water is provided at this stage, the cell may rehydrate and regain “turgor” but the cells functions may be permanently damaged and, as a consequence, will never again be able to achieve 100% function. In plants this results in reduced yield and quality of harvest.

Tradecorp, in collaboration with Landlab, a leading Italian agricultural research centre, has created this new infrared timelapse video to demonstrate that these invisible drought effects, such as increased cell temperature or reduced growth rate do indeed occur, even before wilting is visible.

To visualize these effects, we recorded three sets of plants: 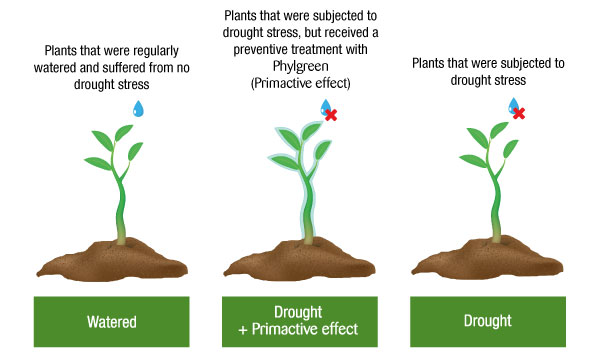 The infrared camera clearly demonstrates that before wilting occurs plants were suffering from abiotic stresses.

The Primactive effect can delay or even eliminate negative abiotic stresses that crops are exposed to during the normal crop cycle – in this example, drought stress. Leaf surface temperature was reduced compared to untreated plants, the onset of wilting was also delayed.

As a result, plants suffered less disruption and damage to their metabolic functions and the growth rate of the Primactive plants was much higher than untreated plants. Reduction of the negative effects of drought helps to protect yield and quality and thus profitability – all thanks to Primactive.

Tradecorp and Landlab have a long history of collaboration and research. This infrared time-lapse video is but one example of the successful research projects that Tradecorp R&D and Landlab have been collaborating on. Tradecorp have used the expertise gained with Landab and other similar research type entities to develop a deep and internationally recognized understanding of Biostimulants and their optimum use in agriculture.