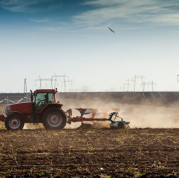 Regardless of the type of soil degradation, growers tend to experience the same result: an increased risk of reduced yield and reduced quality. The FAO estimates that 38% of global cropland suffers from some form of soil degradation such as; poor soil water infiltration, reduced nutrient availability, sodification, salinisation, or adverse soil pH. All these issues result in the loss of soil structure and soil organic matter leading in the end to more unpredictable harvests and reduced profitability. 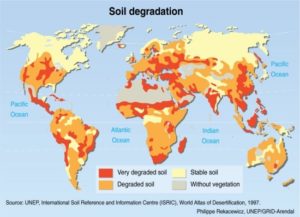 How to manage soil degradation?

The first step in managing reduced soil organic matter and soil structure is to prevent any further degradation of the soil. The second is to then work towards reversing the original causes of the soil degradation.

Pros and cons of the application of composts

The most obvious way to help reduce the loss of soil organic matter is through the application of crop residues and compost back to the soil, and this should always be encouraged. This can be achieved by adding harvest residues directly back to soil at harvest, by growing cover crops in the off season or through the addition of composts. Composts are an excellent source of fibre and nutrients for healthy soil microbiota and plant growth, and essentially also contain dilute forms of Humic Acids. All of these components are beneficial to soil structure.

Certain quality control factors are very important in the manufacture of compost, such as ample heat during the composting process to kill any pathogens and reduce the number of viable weed seeds, and also ensuring that there are low sodium and chloride levels in the final compost. Unfortunately, the addition of composts alone is not always an economic solution. For example, composts are a bulky material and costly to transport over large distances. As a result, most of the compost produced globally is consumed locally, near the site of production and not in the regions that could most benefit from its application.

Humic Acids on the other hand, which are present in small quantities in compost, can also be obtained from other sources and concentrated. This allows for an economic transportation throughout the agricultural supply chain, to areas where they are needed.

The manufacture of high-quality Humic Acid products is a key area of focus for Tradecorp. In fact, one of our very first products was a Humic Acid product named Humifirst / Humistar, which is derived from American Leonardite. While the use of Humic Acids is now considered common in agriculture, in 1985, it was still a very novel concept, making Tradecorp a pioneer company in the development and promotion of Humic Acids in European agriculture. In fact, to this day Humistar is still a top product that is used globally.

The interaction between the web of the Humic Acids and soil or clay particles is knowns as the Clay – Humic Complex (CHC). This Clay Humic Complex is fundamental in maintaining the stability of soil aggregates and thus the soil structure.

Benefits of the application of humic acids

It is easy to see in the previous simplified illustration how soil organic matter and Humic Acids help to hold the soil together, resulting in a soil structure that;

So, what happened when the Humic Acids were added to the soil in the video?

A number of different factors come into play when adding the Humistar to the soil in the video.

The market of humic acids, however, can be confusing. Are all humic acids the same? Do they provide similar results? How to assess the quality of humic acids? Do not miss the answers to these and more questions on our next article!