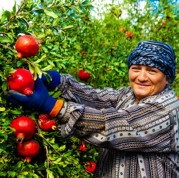 International Day of Rural Women: one third of the world’s population calls for empowerment

On 15 October, the International Day of Rural Women, it is worth remembering the global figures for this group. According to the UN, it represents a third of the world’s population. According to the FAO, it constitutes 40% of the workforce in developing countries, 20% in Latin America and over 50% in Africa and Asia.

Despite the sheer volume of this population group, women encounter more hurdles than men. They face greater difficulties in accessing productive resources, such as land, and services such as loans and social protection. In many cases, and this is also true of developed countries, women work without pay on family farms and they have to combine their work with domestic chores that they are also responsible for.

The UN’s commitment to supporting rural women takes the shape of numerous working initiatives with different states. In addition, it has a specific programme called UN Women that strives to empower women in rural settings. According to this organisation, “women are key to achieving the economic, environmental and social changes required for sustainable development.”

“Empowering them is essential, not only for the well-being of individuals, families and rural communities, but also for overall economic productivity, given the large numbers of women in the agricultural workforce around the world.”

This organisation is committed to this programme because it believes that “rural women guarantee food for their communities, build climate resilience and strengthen economies. However, gender inequalities such as discriminatory laws and cultural beliefs, coupled with a rapidly changing economic, technological and environmental scenario, hinder their full potential, leaving them way behind urban women and men.”

In a recent report, UN Women highlighted the situation of women in rural areas: in Southeast Asia and Sub-Saharan Africa, 60% of women work in rural areas. In the rest of Asia, the Pacific and North Africa the figure is 30%, whilst in Europe and North America it is less than 10%.

However, the way of working differs, because in African and Asian countries the economy is informal. In general, rural women have a lower standard of living, lower wages, poorer health, limited access to social services, few opportunities for social advancement and a lack of a collective voice and influence.

Furthermore, only 13% of people who own agricultural land are women, and rural women are 38% less likely to give birth with the assistance of a health professional than urban women.

Another drawback for rural women is that only 53% of the female rural population has access to safe drinking water. The outcome of not having running water is that it is women and girls who are in charge of supplying water to the family units, which stops them from going to school and from accessing independent jobs, gives them more unpaid domestic work, and puts them at a greater risk of maternal mortality, violence and psychosocial stress. In this sense, more than half of rural women do not have basic literacy skills, which leads to difficulties in finding better jobs, economic independence and social improvement.

A further consequence is that the majority of the 3.6 billion people in the world who are not connected to the internet are rural women, who are poorer and less educated.

To achieve goals that improve the situation of women globally and in rural areas in particular, the UN advocates policies in each country that support decent work and social protection, education and training, access to sustainable energy and technology, access to running water and sanitation, the eradication of violence and harmful practices, the inclusion of women in decision-making and leadership in their communities, and the enhancement of women’s resilience to the climate.

International bodies are paying particular attention to the role of rural women in promoting sustainable development and combating climate change.

The UN’s 2030 Agenda for Sustainable Development encompasses rural development and the empowerment of rural women and girls, and identifies them as a key stakeholder in the fight against climate change. One of the reasons for this is because women are particularly affected by climate change.

In the last speech given by the UN Secretary General, Antonio Guterres, precisely during the celebration of the International Day of Rural Women, the leader highlighted the role of women in the rural environment, stating that they are a “reservoir of knowledge and skills that can help communities to take advantage of low-carbon, nature-based solutions to combat what the UN considers to be the main problem of our time,” referring to climate change.

For the UN, rural women are central to the recovery and application of environmentally friendly farming techniques, are green energy entrepreneurs and are “a powerful force that can drive global progress.”