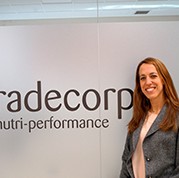 Today is the last day of our Women in Science Campaign.  Today, we want to recognize Irene Sobrado, European Regulatory Affairs Manager.

Irene Sobrado holds a licentiate degree from UAM (Universidad Autónoma de Madrid) in Biology and Environmental Biology, and a Master’s degree in waste treatment management and chemical technology.  She began working at Tradecorp in 2016, and manages European Regulatory Affairs.

Any woman who stands out or excelled in mainly male sectors is always a source of inspiration. As a historical science figure, Marie Curie is always a source of inspiration for me. Pilar Mateo, a Spaniard who developed an insecticide paint to combat Chagas disease, is also an inspiration to me. Her paint is an easily applicable product (sold as paint for houses), harmless to human beings and has a slow release, making it very effective. Despite all its benefits, it had to overcome a lot of difficulties until it could reach the intended populations. Mateo also found the NGO MOMIN (Movement of Indigenous Women of the World).  This organization serves to train indigenous women affected by Chagas disease in maintenance and hygiene to avoid reinfecting houses.

When you decided to pursue a career in science:

Since I can remember, I always knew that I wanted to dedicate myself to science. I studied Biology, intending to dedicate myself to researching genetics, but the uncertain future of researchers in Spain (dependent on scholarships, grants, etc.), made me rethink my future.  I decided to specialize in an area more related to the company / industry. In the end I chose the environmental path and specialized in waste management and treatment.

In the past year and a half at Tradecorp, I acquired greater knowledge of a field which was related to my academic training, but with which I was not so familiar, and I love it. I have had the opportunity to meet very interesting and knowledgeable people with lots of experience in the sector. Thanks to them, my work in understanding the regulation and the current agricultural situation has been simpler and faster. My biggest discovery at Tradecorp has been the biostimulants like the seaweeds that are used for the Phylgreen range. It just seems so logical and creative to me that the best thing for plants are the plants themselves.

Recently, I attended conferences where they discussed the importance of precision agriculture and biostimulants’ roles in increasing nutrient efficiency. I found it really interesting! The development of this technology can help countries with fewer resources to produce food more effectively, which might be the future of agriculture.

Something to be proud of:

I have a special memory of a meeting that I attended at the United Nations headquarters in Geneva, as a Spanish representative for chemical safety issues worldwide. I never thought I would have the opportunity to visit the UN Human Rights Hall, and the famous dome of the Spanish Miquel Barcelo and there I was!