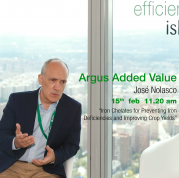 José Nolasco, Strategy and Innovation Director at Tradecorp International, will be giving a speech at the Argus Added Value Fertilizers Europe in Barcelona. His speech will be about the role of “Iron Chelates for Preventing Iron Deficiencies and Improving Crop Yields.” It will take place the 15th at 11.20am.

We sat down with José Nolasco to ask him in detail about the role iron plays and its importance to the pesent and future of agriculture. The talk will be focused on the key role that Fe plays in the crop nutrition process, strategies for improving plant tolerance against Fe deficiencies, as well as mentioning revolutionary iron chelates.

Do you fully understand how the use of iron chelates can affect crop yields? Read the interview to find out more:

Q: What role does iron play in crop nutrition?

A: Iron is one of the essential micronutrients for a crop’s proper physiological functioning. Although it is a micronutrient, and therefore plants require it in small quantities. Iron is a key element in the electron transfer process during photosynthesis and other metabolic processes.

For example, iron’s ability to change valence from Fe + 2 to Fe + 3 makes it a key element in the process of electron transfer during photosynthesis and other metabolic processes. In addition, iron is a structural element of several enzymes. Although it is not part of the chlorophyll structure, iron intervenes in multiple stages of the biosynthesis of this pigment. That is why iron deficiencies in crops can be observed as chlorosis, such as; leaf yellowing, which begins in younger tissues,iron is not very mobile element within the plant. When there is an iron deficiency, less chlorophyll is synthesized and the efficiency of photosynthesis is reduced. Therefore, the plant has direct losses in its yield.

Due to the previous reasons, one must always take iron into account when designing a nutritional program for crops because the consequences of iron deficiencies can imply significant production losses.

Q: If iron is needed in small quantities, why should we add it as a fertilizer? Are the plants not able to cover their needs with the Fe that the soil already contains?

A: The problem is not that iron isn’t available in the soil. The problem is its bioavailability, or its ability to be absorbed by the plants. In fact, iron is a very abundant element within the earth’s surface. However, in many occasions, especially in certain types of soils, iron is found in forms that plants cannot absorb.

Soil pH is one of the most important conditioning factors in terms of availability, especially in soils with alkaline pH. However, there are other factors that limit the availability of iron. An example of such, are the presence of carbonates, phosphates or other components that can react, making it insoluble, so that it is blocked or fixed in the soil and therefore, not available for the plant.

This is why, iron application cannot always correct nutritional deficiency. It is not a question of the element’s quantity but availability to be absorbed by the plant. Hence why the use of high-efficiency iron sources such as chelates is an essential tool.

Q: What differentiates chelates from other iron fertilizers?

A: In several ways, iron chelates stand out against more traditional sources such as salts. Some include: greater solubility, efficiency and lower application doses.
The main difference is that the iron found in chelates is protected against external interactions in the soil and water. Therefore, it will not react with other components by forming insoluble compounds, however, it will remain soluble so that the roots can absorb it.

Some traditional sources, such as iron salts, once solubilized then dissociate and the iron becomes free. This causes the iron to be attracted by soil components or f the nutrient solution components , ultimately forming insoluble compounds and losing their effectiveness. Other sources include molecules that form complexes with iron, giving it protection. However, its stability constant is not high enough to avoid certain reactions, forming precipitates and again, losing efficiency by not being bioavailable.

Given that the stability constant of chelates is high enough to avoid these interactions, iron chelates are considered the most efficient source for preventing iron deficiencies and a correct chlorosis. For decades, this has been proven by many scientific articles and agronomic trials.

Q: How long have iron chelates been used in agriculture? Could their use be considered widespread?

A: I think so. Today, of farmers whom face micronutrient deficiency problems, the vast majority know about the existence of chelates, making its use widespread.

Over 50 years ago is when the first iron chelates came into use. An example of this are the traditional chelating agents EDTA and EDDHA, which Tradecorp has been synthesizing for over 30 years. These have yielded renowned products with excellent agronomic results, such as Ultraferro.

Today’s challenge is getting new chelating agents, ones that are more efficient and environmentally friendly. That is why Tradecorp has spent years researching the creation of new chelating agents. This has allowed us to create new iron chelates, for example our new biodegradable chelate : IsliFe 8.2

Q: What innovative factor does IsliFe 8.2 bring to the table?

A: In the industry there is a clear trend towards solutions that allow a more sustainable agriculture. This requires products that are not only environmentally friendly, but that are highly efficiency solutions allowing more production with less inputs.

After many years of research in the chemical, industrial and agronomic sector, Tradecorp has launched IsliFe 8.2; the first biodegradable iron chelate suitable for alkalinity conditions.

IsliFe 8.2 has a high stability constant even in high pH conditions , ​​making it possible to guarantee that iron is protected in a pH range between 3 and 11.

Another main advantage is that IsliFe 8.2 has a high iron content, 8.2%. This allows for the use of lower doses than other chelates, while maintaining the same amount of iron, thus allowing for more efficient applications.

Just like other chelates synthesized by Tradecorp, where our rigorous quality controls are applied, our technology allows to manufacture chelates in micro-granulated form, with a high solubility and with a 100% chelation grade.

Last but not least, IsliFe 8.2 pertains a novelty: gradual biodegradability. This is thanks to its high stability constant which guarantees iron availability throughout the crop cycle, while also being a biodegradable molecule that prevents the accumulation of soil waste, achieving an optimal balance between agronomic efficiency, and sustainability.

IsliFe 8.2 is a revolutionary solution to help obtain a more efficient and environmentally friendly agriculture. This is why we say that IsliFe 8.2 is the first high stability iron chelate with innovative and gradual biodegradability.