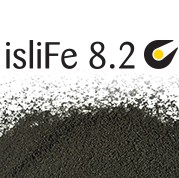 IsliFe 8.2, Tradecorp’s new iron chelate, combines persistence and progressive biodegradability to deal with iron deficiencies, even in the most unfavorable conditions

More than a decade of work and research yield results in Islife 8.2, a novel iron chelate that corrects and prevents iron deficiencies even in unfavorable conditions, such as calcareous and alkaline soils with extreme pH conditions. Thanks to its exclusive chelating agent, IsliFe 8.2 has a unique feature: progressive biodegradability, which combines biodegradability with high availability of iron throughout the crop cycle.

With this launch, Tradecorp turns the attention of the market to the chelates, the range of products that helped the Spanish company (belonging to Sapec Agro Business) position itself as a global benchmark. Despite the increasing attention generated by biostimulants and Tradecorp’s investments in this segment in recent years, José Nolasco, Tradecorp’s Director of Innovation and Strategy, affirmed that this is not a change in Tradecorp’s strategy since “We have never stopped considering this part of our business as strategic and a priority “.

Chemical and agronomic characteristics of IsliFe 8.2

Amongst the advantages that Tradecorp highlights for its new iron product is its high iron content (8.2%), which is greater than that of other chelates with similar characteristics and stability. It also guarantees a 100% chelation grade and a high stability constant, which allows for the protection of iron against possible interactions that could limit its effectiveness.

In addition, IsliFe 8.2  presents a wide range of pH stability of the chelated fraction (3-11), “which makes it an ideal solution for the prevention and correction of iron deficiencies in extreme pH conditions”, explained Nolasco. This stability differentiates IsliFe 8.2 from other biodegradable chelates available on the market, which “show stability up to a pH close to 7”, added the director of Strategy and Innovation.

The agronomic trials developed by Tradecorp in collaboration with independent research centers revealed the efficacy of the product, even when applied in lower doses than other products available on the market. IsliFe 8.2 provides a fast correction of iron chlorosis, as the chlorophyll synthesis increases immediately after its application. Because of its persistence, it also efficiently provides iron to the plant throughout the crop cycle; even after months of the application.

IsliFe 8.2 is Tradecorp´s answer to the market trend towards more efficient, profitable products with a lower environmental impact. This milestone in Tradecorp is aligned with the group’s strategy that aims to “be a world leader in clean, sustainable and ecological agriculture,” Nolasco explained.

One of the differentiating features of IsliFe 8.2 when compared to other chelates on the market is its progressive biodegradability, “which simultaneously allows for a low environmental impact, thanks to its degradation; and a high persistence, by progressively and gradually degrading throughout the crop cycle, ” stated Nolasco.

Registration and availability of IsliFe 8.2

Because of its innovative chelating agent, IsliFe 8.2 is not included in the current fertilizer legislations. Although Tradecorp has already started the registration process in some countries, “registration requirements as well as times vary from one country to another. As a consequence, in some countries – like Australia – we could launch immediately, while in others – like Mexico – the process could take up to two years” said Sara Tormo, director of Regulatory Affairs at Tradecorp.

Regarding the introduction of this product in the European market, Tradecorp has already requested the amendment of legislation along with the inclusion of a new type of fertilizer. The Director of Regulatory Affairs explained “by the end of this year, we expect approval from the Spanish Authorities” and added that “with this approval, we will begin mutual recognition procedures for other countries within the European Union”.