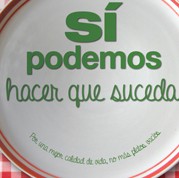 More than 1500 kg of food donated to Caritas in Spain

At the end of 2015, Tradecorp launched, as each year, its Operation Kilo in Spain, a collection of food in the offices of Madrid, factories and laboratories. The food collected during the campaign was donated to Caritas, official confederation of the entities of charitable and social action of the Catholic Church in Spain.

In the campaign, company employees donate non-perishable food items and for each kilo contributed by the team, Tradecorp donates a kilo more.
The result of the Operation Kilo of 2015 was more than 1.5 tons of food donated to Caritas and were distributed the following way:

Thank you to all the team of Tradecorp for helping filling the dishes of many families!