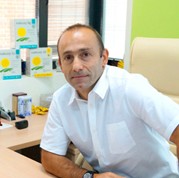 Nicolas Lindemann, executive director in Tradecorp, appointed head of the Task Force on Salts, Minerals and Chemicals in EBIC

At the EBIC General Assembly held in Dublin on 1 July 2014, EBIC’s members renewed the association’s board of directors. Six members of the board were re-elected, with one member continuing a two-year term after election in July 2013.

EBIC has also appointed new leaders for two of its technology task forces: