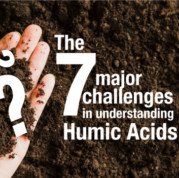 The Humic Acid market remains one of the most challenging, confusing, and least understood aspects of the global agricultural input market. Tradecorp analysed the industry in detail and highlights the 7 major challenges for the humic acid industry on this article.

1. First of all, what does the term “Humic Acids” refer to?

In simple terms “general” Humic Acids can be described as all of the various organic acids derived from humus. Humus is the organic portion of soil, which is formed from the decomposed remains of plants, animals and soil microbiota. Humic Acids can be further subdivided into Humic Acids and Fulvic Acids, however for the purposes of this article we refer to them collectively as Humic Fulvic Acids.

2. One or many different Humic and Fulvic Acids?

3. The amount of Humic and Fulvic Acids in the bottle?

For example, some countries require the same standardised test be used on all Humic Fulvic Acid products, which gives some degree of cross comparison capability. However, in contrast, other countries allow different Humic and Fulvic Acids tests to be used on products that will be eventually be sold side by side.

The different Humic and Fulvic Acid tests will give different results, although they might be measuring the same thing! Differences of more than 20% are not uncommon between different testing methods and thus, there is often no way for retailers and growers to compare one product with the other, even by reading the label!

All testing methods have both strengths and weaknesses and for the various Humic and Fulvic Acid tests it is no different.

In most cases the grower is usually paying for Humic Fulvic Acids that are readily plant / soil available and this is what should be inside the bottle… but this is not always the case.

5. Use of inconsistent language and exaggerated claims

This is responsibility of both manufacturers and governments around the world. It is common to see words such as potassium humate, humates, humus, compost, organic matter, humic dust, manure etc., – all of which mean different things – used interchangeably when talking about Humic Fulvic Acids.

6. Where do Humic and Fulvic Acids originate?

It may be difficult to believe, but even today the exact natural origin of Humic and Fulvic Acids in soil is not fully understood by scientists. Humic and Fulvic Acids are somehow derived from decaying plant residues, although the exact production pathway remains unclear. They can be extracted from various sources such as coal type materials, peat, worm castings, composts and soil.

In most cases, legislation will demand that total Humic and Fulvic Acids are declared on the label. However, the source, quality, strengths, weaknesses, and field performance of the unrelated Humic Fulvic Acid products may be very different and affect the end result that growers obtain from their investment in these types of product.

7. Lack of consistent tests to measure the quality of Humic Acids:

Globally, almost all government testing and registration protocols focus on quantitative Humic Acids tests to determine “how much” Humic Fulvic Acids are in the bottle, rather than utilising qualitative tests that measure and focus on “the quality” of the product in the bottle.

These 7 challenges combine and make accurate description of Humic Fulvic Acid products one of the biggest challenges for the global Soil Amendment sector. To find out how Tradecorp’s is responding to this and also some pointers to help you identify products that may potentially be high quality, do not miss out on our next article. Coming soon!