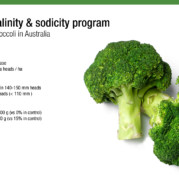 Between 25 – 35% of worldwide agricultural lands are affected by salinity and sodicity which are two of the most difficult abiotic stresses to manage.

Below we present a case study of a grower from Australia who used a Tradecorp salinity and sodicity management program. The strategy used products from the locally available portfolio and was adapted to the specific field situation by the local Tradecorp Australia team. 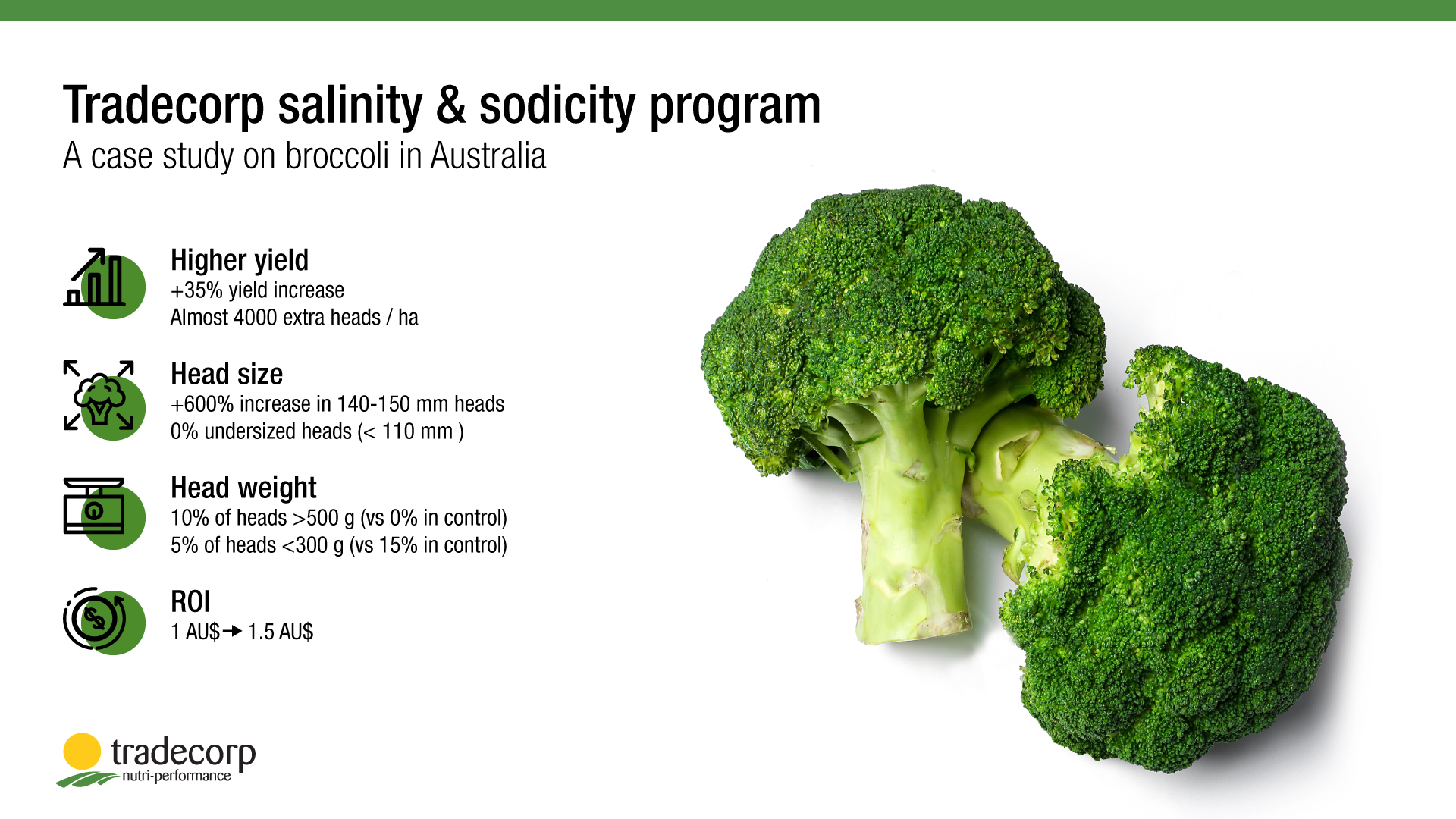 Soil salinity and sodicity affects about 50% of Australia’s agricultural land. This Tradecorp program was used in Queensland in a clay loam soil that is naturally rich in Potassium and has a high natural fertility. Soils in the area are traditionally used for cultivating vegetable and root crops.

In recent years, the soil in the area has suffered from increasing salinity, partly due to the irrigation water, which also suffers from high salinity, in particular dissolved Sodium and Chlorides. Growers in the region practice good salinity and sodicity agronomic management practices, such as regular applications of Gypsum. However, due to limited rainfall the problem is increasing year on year.

The soil at study site (5 ha, Control – existing program, 5 ha Tradecorp program) was classified as highly / severely saline, and the irrigation water contained high Sodium and Chlorides and was classified as Class 4 (both classifications were under Australian standards). The soil had an organic matter content of 2 – 3%, high NPK, Calcium, Magnesium and micronutrient status. Soil EC was high at ~150 mS/m, had high Chlorides, Sodium was also high, bordering on sodicity. Overall the site of the study is representative of the soil conditions in the region in general.

The Tradecorp Australia team developed a salinity and sodicity strategy adapted to the local field and crop situation. The program consisted of:

The program was applied to transplanted Broccoli, (a moderately salt sensitive crop) that is grown under drip irrigation.

The results: Outstanding outcome in yield and quality with Tradecorp salinity and sodicity program…

During crop growth, parameters such as root length and stem diameter were positively increased – indicating the benefits of the Tradecorp salinity and sodicity program during the growth phase. The crop was hand harvested, as is typical for Broccoli, and tracked through the processing and packing facility.

At the first cut-out, yield was increased +34%, both through higher head weight, as well as a higher cut-out percentage.

At the second cut-out, yield was increased +38% giving a net total yield increase of +35%. The cut out was high enough in the Tradecorp Program that a 3rd cut was not necessary, and this also eliminated the labour cost associated with this.

Analysis of the data indicated that in addition to the higher yield achieved through the extra cut-out of the crop (almost 4000 extra heads were harvested /ha), the quality of the individual heads was also improved as outlined below. 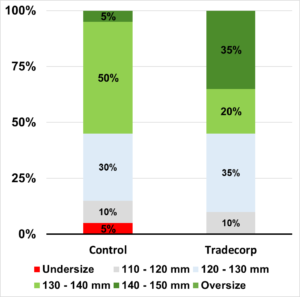 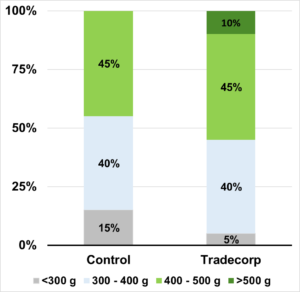 …and also a great Return on the Investment (ROI)

The crop was tracked through the processing and packing facility and the Return on Investment (ROI) calculated. For every AU$1 the grower invested in Tradecorp products to manage salinity and sodicity, the grower recovered this investment, and also made an extra profit of AU$1.5 (ROI 1:1.5) indicating the financial benefit of working with your local Tradecorp team, and portfolio, to overcome agronomic problems specific to your local situation.

How can the incredible results of the Tradecorp salinity and sodicity program be explained?

From the 7 tips outlined for a Gold Standard salinity and sodicity management program, 4 were included in this particular program:

Tradecorp local teams can help with your results!

Should you have any questions in how to manage Salinity and Sodicity in your crop, how to better manage Abiotic Stress in general or other agronomic needs, our local team is ready to assist you. Please get in contact with your local representative. Contact us.

This website uses cookies to improve your experience while you navigate through the website. Out of these, the cookies that are categorized as necessary are stored on your browser as they are essential for the working of basic functionalities of the website. We also use third-party cookies that help us analyze and understand how you use this website. These cookies will be stored in your browser only with your consent. You also have the option to opt-out of these cookies. But opting out of some of these cookies may affect your browsing experience.
Necessary Always Enabled
Necessary cookies are absolutely essential for the website to function properly. This category only includes cookies that ensures basic functionalities and security features of the website. These cookies do not store any personal information.
Non-necessary
Any cookies that may not be particularly necessary for the website to function and is used specifically to collect user personal data via analytics, ads, other embedded contents are termed as non-necessary cookies. It is mandatory to procure user consent prior to running these cookies on your website.
SAVE & ACCEPT