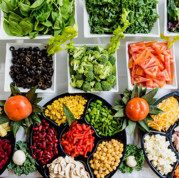 This year, the slogan for World Food Day is “Grow, Nourish, Sustain. Together”, and it is joined by the hashtag #FoodHeroes which seeks to put the spotlight on producers around the world who provide food to all the planet’s population and who, during the COVID-19 crisis, have proved to be true heroes the world over.

Thus, this year, the FAO would like to pay tribute to all farmers, distribution centre and factory workers, transporters, shop-owners and traders. At this time, the FAO believes that “it is more important than ever to support our food heroes, farmers and workers throughout the food chain, who ensure that food is delivered from farm to fork, even in times of unprecedented upheavals such as the current COVID-19 crisis”.

However, on this occasion, the Food and Agriculture Organisation invites everyone to be food heroes, with a 10-point list of simple actions. The FAO encourages us to make healthy, local and seasonal food choices; to learn to grow food at home, to respect food and the environment so as to reduce waste, and to follow sound food hygiene practices.

World Food Day was first celebrated in 1979, coinciding with the day the FAO was founded, – 16th October 1945. Since then, its aim has been to raise people’s awareness of the global food problem and to boost cooperation in the fight against hunger, malnutrition and poverty.

This year, the celebration of this day coincides with a “call for global solidarity to help the most vulnerable people recover from the crisis and to make food systems more resilient and robust so that they can withstand increased volatility and the impacts of climate change, provide a healthy, affordable and sustainable diet for everybody, and decent livelihoods for those working in the food chain”.

A slogan for biodiversity

In addition, this slogan –“Grow, Nourish, Sustain. Together”– responds to the FAO’s annual campaign to focus on the areas most in need of change.

On this occasion, the FAO seeks to highlight the need for biodiversity. Over the course of human history, between 8,000 and 10,000 different species have been used for food. Today, around 150 are produced and commercially distributed, though only nine plants account for 66% of total crop production worldwide.

Another objective of this international day is to draw attention to a long-standing issue: hunger and malnutrition in the world. According to the latest UN report, dated July 2019, 820 million people continue to go hungry, despite the fact that twice as much food is produced each year for the entire world population.

This lack of food remains the leading cause of death worldwide, according to the Global Nutrition Report, drawn up by an independent body created in 2013 that strives to achieve a world free from malnutrition in all its forms. However, malnutrition is not only caused by a lack of food, but also by inadequate nutrition. Overweight and obesity are also examples of malnutrition.

In the case of undernourishment, the figure is as high as three billion people and includes those who do not have a healthy diet, i.e. one that contains all the nutrients needed for optimal development.

Yet with the amount of food produced in the world, why are there two extremes – hunger and obesity? In the case of food shortages, UNICEF  believes that one of the main reasons why millions of people still suffer from serious food and nutrition problems is because of armed conflict. These generate food insecurity, inflated food prices, the destruction of water and sanitation systems, precariousness in health centres, and difficulties for humanitarian aid to reach the places most in need.

In addition to armed conflict, climate change is affecting many agricultural areas, especially in developing countries. Political instability in some regions also prevents the implementation of strategic measures to increase productivity and tackle hunger.

Against this background, where more than 800 million people are hungry, and 3,000 do not have a healthy diet – resulting in both malnutrition and obesity and excess weight – the World Health Organization (WHO) is working with the FAO to promote a healthy diet.

This is the best tool for preventing non-communicable diseases such as diabetes, heart disease, strokes and cancer.

The WHO is committed to a diet that includes fruit, pulses and vegetables, is free of sugar and ultra-processed foods and contains a moderate amount of salt.

For its part, on World Food Day, the FAO insists on the need for appropriate nutrition: “Good nutrition is the first line of defence against disease and our source of energy for living and being active. There are many nutritional problems that are caused by a poor diet and when they affect an entire generation of children they can undermine their ability to learn, thus compromising their future and sustaining a generational cycle of poverty and malnutrition with serious consequences for individuals and nations”.

To achieve this objective, the international organisation appeals to the responsibility of producers and private companies. It calls on them to ensure “that food systems can grow a variety of foods to nourish a growing population so we can sustain the planet together”.