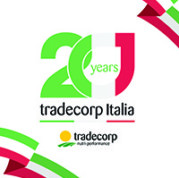 In early 2001, Marc André, who was the Director of Tradecorp in Europe at the time, contacted Luigi Taraborrelli, the manager of an American multinational who was looking for new challenges. That phone call marked the beginnings of Tradecorp Italia which, over the last 20 years, has carved out a leading role for itself in the special nutrition segment in the highly competitive Italian market.

As a result of the internationalisation drive that started in 2000, the Spanish company decided to open an office in Italy, one of Europe’s leading agricultural countries. Its initial portfolio was based on its most popular products at the time, such as Humifirst (then Humistar), Folur and Final K. It subsequently added chelates, Tradecorp’s flagship range, whose production plant in Avila (Spain) is one of the few in the world that can synthesise the chelating agent EDDHA.

In the Italian market, Tradecorp, together with other leading companies in the sector, was one of the first firms to talk about biostimulants in 2009 and 2010, promoting their beneficial effects on plant metabolism and boosting production. In 2011, Tradecorp was one of the founding members of the European Biostimulant Industry Council (EBIC) and, in 2012, Phylgreen, a biostimulant based on Ascophyllum nodosum brown algae processed using an exclusive cold extraction system, was launched on the Italian market. 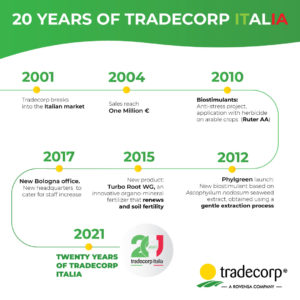 These are some of the milestones in the history of Tradecorp Italia, a company which has forged its excellent reputation thanks to its robust product range but above all to its staff who, based on sheer hard work and commitment over the years, have enabled the company to grow in a country which is at the forefront of good agricultural practice.

Tradecorp Italia, the group’s sales subsidiary, is made up of a group of 40 highly committed people, including employees and external partners. Many of them have been involved in the project from the outset and we would like to thank them for all of their efforts over the years.

Finally, special thanks go out to all our business partners, resellers, technicians and farmers who have placed their trust in us over the last two decades, making the growth of Tradecorp in Italy a reality.