» News » Tradecorp pushes for organic: 47 products approved by Ecocert in 2021 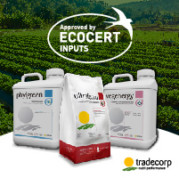 Tradecorp pushes for organic: 47 products approved by Ecocert in 2021

Tradecorp continues to demonstrate its commitment to environmental sustainability and organic agriculture.

The international company based in Spain has been investing heavily in organic since the early 2000s, researching, developing, formulating and manufacturing products that are suitable for organic agriculture.

The list of products approved for organic agriculture by Ecocert in 2021 includes many of Tradecorp’s premium products, such as Vegenergy, Phylgreen and Final Eko, along with many other key products in Tradecorp’s portfolio.

More than ever, market trends are moving towards organic, environmentally friendly products and solutions. Besides the initiatives that are pushing for organic like the Green Deal and Farm to Fork, recent statistics reveal that this trend set new records in 20191, with 72.3 million ha farmed worldwide and a market of over €106 billion, according to FIBL.

Since 2006, Tradecorp has been working to ensure that its organic range is approved by recognised certification bodies. This gives farmers guarantees that the products they are using comply with the necessary requirements for use in organic agriculture.

Every year, Ecocert Ibérica, the Spanish branch of Ecocert, verifies Tradecorp’s products and performs a comprehensive audit of its production plants, including a thorough “in situ” analysis of its manufacturing processes. In addition, Tradecorp works with other organisations, such as FIBL, OMRI and Australian Certified for the verification and approval of products for use in organic agriculture. 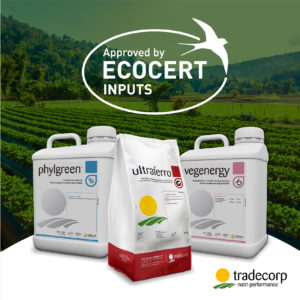