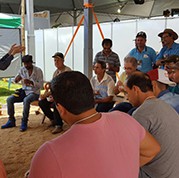 Tradecorp’s participation in the 16th edition of the Machinery, Implements and Agricultural Supplies Fair (Femagri), held in Guaxupé, MG, between the 8th and 10th of February was a success. Promoted by Cooxupe, the fair received 37,121 visitors, a larger audience than the 2016 edition, which had 35,025 visitors.

In its third participation in the fair, Tradecorp Brasil received approximately 1,500 visitors at its booth, all of which had the opportunity to receive information about the products and consult the Tradecorp team, who showed the importance of the anti-stress treatment for the productivity and quality of the coffee plants.

Information was presented to visitors on the benefits of physiological nutritional strategies for coffee, focusing on the following products: Pumma, Humitec, Ruter, Brasilis, Delfan and Phylgreen.

A special activity for children

Tradecorp Brasil presented coffee seedlings to more than 300 children of coffee farmers, in a special action aimed at reinforcing concern for the environment as well as love and care for farming – values that are transmitted from generation to generation. The idea was to encourage them to take care of their own coffee trees, accompanying the development of the plant over the years, thus maintaining a family tradition and the culture of the region. The children also received a booklet with space to record their own growth and growth of the plant, as well as information on how to care for their coffee plants and guidelines on how to apply samples of the Phylgreen line, which are  biostimulants based on seaweed Ascophyllum nodosum extract, indicated for different stages of crop development and aimed at overcoming stress and correcting micronutrient deficiencies.

In an interview with TV SUL, Tradecorp presents its nutritional physiological strategies for coffee cultivation

During the 16th edition of Femagri (Trade Fair for Machinery, Implements and Agricultural Supplies) held in Guaxupé, Minas Gerais, the Agronomist of Tradecorp Marcelo Lara, regional coordinator São Paulo and South of Minas Gerais, presented in a live interview with SUL TV, Guaxupé, the company’s nutritional and physiological strategies for the coffee crop, which were available to coffee farmers who visited the fair. Marcelo explained how Tradecorp products work in the coffee plantations and the benefits and results in productivity that the nutritional physiological strategy Tradecorp gives to the farmers.

Click here to see the interview on SUL TV, which begins around the 11th –minute of the video.